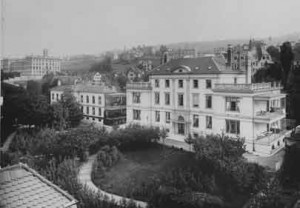 When Joyce was taken ill with violent stomach pain, he was taken to the Schwesternhaus zum Roten Kreuz, Gloriastrasse 14. His condition deteriorated until he died of perforated duodenal ulcer on 13 January 1941.
(The original building was demolished to make room for the Careum Bildungszentrum.)