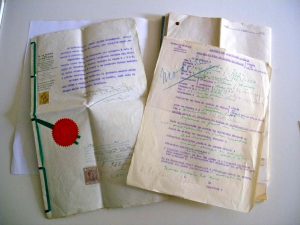 The Hans E. Jahnke Bequest at the Zurich James Joyce Foundation can be viewed online at the National Library of Ireland.

Contents of the Hans E. Jahnke Bequest to the Zürich James Joyce Foundation of 31 March 2006

Letters and cards from Joyce ca. 34 postcards signed (23 to Giorgio)

Letters and cards to Joyce

Other letters and cards

Anna Livia Plurabelle. First edition. With a preface by Padraig Colum. New York: Crosby Gaige, 1928. Copy No. 9. Signed “James Joyce”. With a blue-framed half label “Georges Joyce” stuck on inside of cover. (Slocum & Cahoon, A 32)

Pomes Penyeach. Paris: Shakespeare & Co, 1927. With a blue-framed half-label “Georges Joyce” stuck on inside of cover. (Slocum & Cahoon, A 24)

Two Essays. “A Forgotten Aspect of the University Question” by F.J.C. Skeffington, and “The Day of the Rabblement” by James Joyce. With a dedication “a mio figlio Giorgio il giorno del suo ventunesimo compleanno, li 27 luglio 1926 / Parigi James Joyce

Recollections of James Joyce by his brother Stanislaus Joyce, 1950; copy no 458

Ellmann, Richard. “The Backgrounds of Ulysses”. Offprint from The Sewanee Review, XVI (Summer 1954) 3. With a dedication on the first page: “To George and Asta Joyce with gratitude and in fond recollection of our annual visits in Zürich Dick Ellmann”.

Ellmann, Richard. “The Limits of Joyce’s Naturalism”. Offprint from The Sewanee Review (1955). With a dedication on the first page: “To George Joyce with kindest regards RE”.

The University of Buffalo Studies. 22.1 (April 1955). The Personal Library of James Joyce. A Descriptive Bibliography by Thomas Conolly.

The James Joyce Review. Vol. I, no. 2; June 16, 1957. With essays by Adaline Glasheen, William White, and Ruth von Phul, as well as notes and reviews.