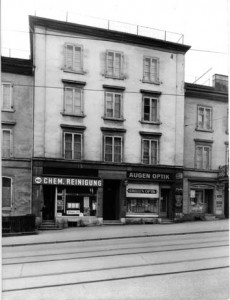 In James Joyce and the Making of Ulysses, Frank Budgen describes this flat as “a modernish house of no particular character.” He goes on that, “Mrs. Joyce complained that a superfluity of mice and a shortage of culinary utensils cramped her style in the kitchen, but apart from that, it seemed to me not a bad apartment as apartments go.” It was in this apartment that Joyce wrote four more episodes of Ulysses: Scylla & Charybdis, Wandering Rocks, Sirens, and Cyclops. In December 1918, Joyce met Martha Fleischmann, who is said to be the model for Gerty McDowell, and wrote her some letters in German and French.